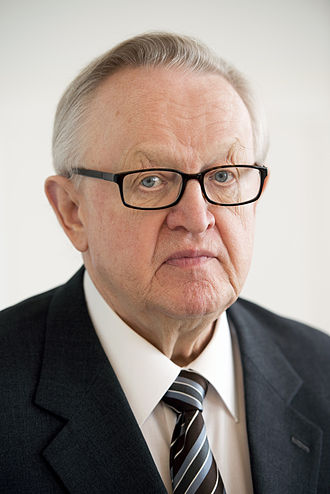 Nobel Peace Prize winner Martti Ahtisaari served as President of Finland from 1994-2000. Ahtisaari was a major contributor when Namibia achieved independence in 1989-90, arbitrated in Kosovo in 1999 and 2005-07, and helped to bring the long-lasting conflict in the Aceh province in Indonesia to an end in 2005. A highly regarded international mediator, President Ahtisaari  founded the Crisis Management Initiative, a non-governmental organization that works to enhance preventive diplomacy, peace-making and post-conflict state-building. In addition to his work with conflict resolution and peace building, he works with youth employment and entrepreneurship through the ImagineNations Group. Since the death of Mauno Koivisto in May 2017, Martti Ahtisaari is currently the oldest living President of Finland.