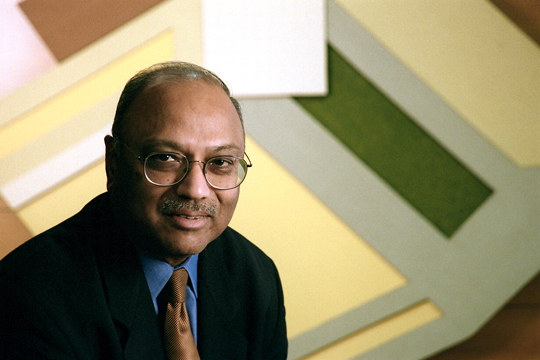 C.K. Prahalad was one of the world’s most influential business thinkers and one of the most beloved teachers at the University of Michigan, had a huge impact on business and business education around the world.  He created the base of the pyramid idea and changed the way the world viewed India’s economic potential.

At the time of his death in 2010, he held the title Paul and Ruth McCracken Distinguished University Professor at the University of Michigan’s Ross School of Business, specializing in corporate strategy.  His books included 'Multinational Mission: Balancing Local Demands and Global Vision' (1987), co-authored with Yves Doz; 'Competing for the Future' (1994), co-authored with Gary Hamel, printed in fourteen languages and named the Best Selling Business Book of the Year in 1994; 'The Future of Competition: Co-Creating Unique Value with Customers' (2004), co-authored with Venkatram Ramaswamy, described by Business Week as “provocative” and “an important book full of disruptive ideas”; and 'The Fortune at the Bottom of the Pyramid: Eradicating Poverty through Profit' (2004) which was selected as one of the best books of the year 2004 by The Economist, Fast Company and Amazon.com.

Prahalad was co-founder and became CEO of Praja Inc. ("Praja" from a Sanskrit word "Praja" which means "citizen" or "common people"). The company had goals of providing unrestricted access to information for people at the "bottom of the pyramid" and providing a test bed for various management ideas. It eventually laid off a third of its workforce, and was sold to TIBCO. In 2004 Prahalad co-founded management consultancy The Next Practice, to support companies in implementing the strategies outlined in The Fortune at the Bottom of the Pyramid, which continued in operation as of 2015.[16] At the time of his death he was on the board of TiE, The Indus Entrepreneurs. Prahalad was a member of the Blue Ribbon Commission of the United Nations on Private Sector and Development.